As Good As New

Fixing a leak, whether it's a leaky pipe or from roof damage, is only half the battle — you must also address any interior water damage that occurs as a result of the leak. Often moisture seeps down and affects the ceiling below the leak. Knowing the signs that water damage has occurred helps ensure that you get the issue fixed before it gets worse.

One of the earliest signs of ceiling water damage is visible discoloration. You may notice brown or yellowish stains on the ceiling where the water damage is occurring. These spots generally form in concentric but irregular shaped rings. The ceiling plaster may seem soft to the touch if there is still moisture present, but it may also be completely dry on the surface if the leak was repaired some time ago.  If no further damage exists, the stain can be repaired with special stain-blocking paint.

Mildew can quickly attach moist ceiling plaster. If there are green or black discolorations on the ceiling, then chances are mold or mildew is present. Even if the ceiling is now dry, those mold spores remain and they can quickly begin to grow again during wet or humid weather. Mildew or mold growth can cause respiratory and other health issues. The ceiling plaster needs to be removed and replaced in order to solve the problem.

Stains may not always show up with water damage. In some cases, the paint works like a seal, which holds the moisture from leaking through the ceiling plaster. Instead, the paint may begin to bubble or peel. In some cases, it works so well at blocking moisture that a large bubble forms that can cause major damage if it gives way. The plaster will need to be replaced, and any water damage to the ceiling joists above will also need to be repaired.

Water damage, especially when it is persistent and untreated, will begin to put out an odor. Usually, this is a musty odor from the mildew and mold spores forming in the ceiling. If the leak is from an upstairs toilet, there may be an odor of raw sewage. A sweet rotting smell can also form due to the rotting plaster and wood. Rotten portions of the ceiling must be removed and replaced.

Contact a water damage service in your area for more assistance. 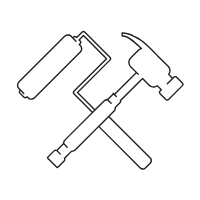 When you want something to look as good as new, it's important to hire the right repair and restoration team. This holds true whether you are seeking repairs for your car, for your house, or for an appliance. A good floor restoration company, for example, can make a worn hardwood floor shiny and smooth again. A good auto restoration team can buff out those scratches and get your baby gleaming. We love the value of a good repair, and that's why we created this blog. We hope that you enjoy the articles we share here, and that they help you appreciate the benefits of making repairs.